Recently, the Hog Roast Oswestry team were hired by Elena, a local client, for an event she was hosting. The event was being held at Garth Barns on the farm in Van, Llanidloes. The event was quite casual and so the team was served as a buffet to Elena’s guests. 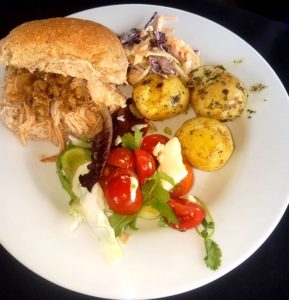 Elena selected Menu Four for the Hog Roast Oswestry team to serve to her guests. The menu featured a whole slow roasted hog as the buffet centrepiece, which was cooked to perfection in one of the Hog Roast Oswestry team’s Hog Master machines which helped to create some crispy crackling but also cooked the meat evenly. The team served the tender meat which some complimenting sides including homemade stuffing and fresh apple sauce. The team also served the meat which a selection of bread rolls and wraps, including cheesy bread, as well as a range of sauces. A range of fresh salads, including crunchy coleslaw, were also served alongside the meat was well as new potatoes that had been soaked in herb butter. A vegetarian option of lightly grilled vegetable and halloumi wraps which were served with Tzatziki dip and pitta breads was served as an alternative to the meat.

The Hog Roast Oswestry team’s Head Chef, Paul, who arrived to the venue several hours before the serve time to ensure that everything was cooked perfectly. The Head Chef also seasoned all of the food to ensure that all the food was full of flavour. The team also prepared all of their ingredients on site so that the food retained its freshness. The buffet was served to 32 guests at quite an intimate event so it was important that the team served quality food. After the service, the Hog Roast Oswestry team cleared all of the waste away discreetly and quickly. By using disposable plates, it allowed the team to clear when away afterwards and did not leave any washing up for Elena so that she did not have to lift a finger in terms of catering. The team also provided all of their own equipment and were pleased they could make Elena’s event special.